It’s almost over. Tonight Stephen Universe of the Future broadcast the penultimate episodes of Mr. Universe and Fragments. The finals of the four-part series will take place on the 27th next week. March, from 7:00 p.m. (Eastern time). In view of this week, we had the opportunity to interview the creator of the universe, Stephen Rebecca Sugar, and although most of this interview will only appear after the finals, we asked a few questions about today’s episodes. Buckle up, guys.

Spoiler for episodes of Stephen Universe of the Future Mr. Spoiler. The universe and its fragments are following him! You’ve been warned.

In Mr. Universe, Stephen’s father Greg travels as a couple, for the first time in the history of the series, to his own home. Stephen eventually finds out and regrets not having had a more typical childhood, as Greg tells him how he discovered and fought music under his parents’ roof – which influenced his own way of raising children. While he’s working, Greg shares a special number with Stephen. Stephen learns that his last name comes from a song his father once loved.

In fragments, Stephen leaves the comfort of his home and the crystal beads to hide and train with Jasper. That’s the last place they’ll look for him, isn’t it? Unfortunately, Jasper’s self-destructive tendencies and anger reveal the worst in Stephen, and he eventually bow to his power as Diamond and crushes him in a duel.

In the period prior to the two episodes, ComicBook.com had the opportunity to talk to Sugar, as mentioned above, and although we have not gone into all the details of what happened in each episode, Sugar talked about the very important moments of the two episodes. The interview follows below! 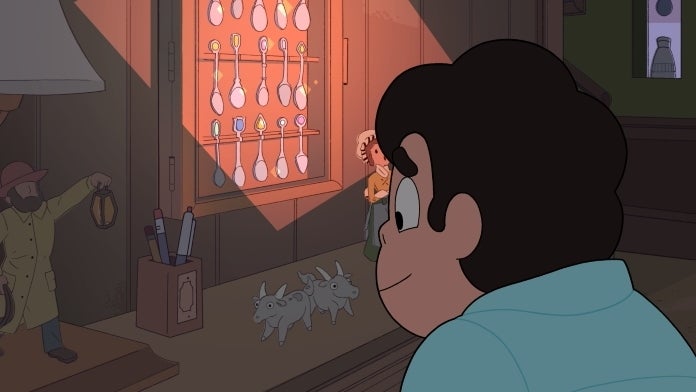 How did this happen?

I’ve been a big fan for a long time and Tom Scarpling, Greg’s voice, worked with Jemaine on the What We Do in the Shadow series, which is fantastic. So they met, and I saw him at the Emmy’s and I thought Oh, don’t ask him about that part, just go tell him you’re a fan. Then I went to him and told him right away: I really want you to do this part, please. That’s when we made contact. I’m really glad I had the chance to work with him at the fair. He’s awesome. I always feel honoured when singers sing songs for the show, because I know they feel it meets a certain standard. I would also like to mention that this song was written by Jack Pendervis, our author, who also wrote in Adventure Time. I loved working with Jack.

To what extent did Jemaine really participate in the process, or did you all send him a song and he just did it?

Yeah, we sent it… we have a demo. Jack Pendervis did a demo on the accordion. He wrote the song on accordion, and then I translated it on guitar, and we sent the guitar version to Jemaine.

Well, speaking of those episodes, fragments – after Forever, I thought it might not be such a touching episode, but then Stephen Jasper put down, of course. How was it decided that this would happen there? It’s the beginning of the finals, really.

That’s right. We really sat down to find out how Stephen would feel emotionally throughout the season and we had to discover all the ups and downs and how that would help him. We needed something to bring it to a minimum and a great fear of ourselves.

For years we wanted an episode where Stephen and Jasper would train together, and I was very interested in how that would affect him. She has always been very hard on herself as a character and has really struggled with her self-esteem and is self-destructive in many dangerous ways. So it’s a very dangerous combination to be his mentor in this state, and I wanted to show you that.

For example, the Cartoon Network describes the following franchise agreement:

The universe of the future ends when Stephen begins to doubt his purpose because he no longer has any gems that can help him. Who is he if he doesn’t save the world? And what is this strange new power that makes them glow pink? Without solving the problems of others, he will end up having to deal with his own problems.

Stephen Universe of the Future will be the last episode of the four-part series (Homeward Bound, Everything’s Fine, I Am My Monster, The Future) on the 27th. March at 7 p.m. ET. Further interviews with Sugar will be published at that time. You can read all our previous reports on Stephen Universe here.

This interview has been slightly modified for reasons of length and clarity.

Did you know that ComicBook.com offers a podcast? That’s right, folks, ComicBook Nation is available every Wednesday and Friday with the best news of the week from Kofi Outlaw, Matt Aguilar, Janell Wheeler and the rest of the team. Watch the latest episode here or sign up for iTunes today!

Disclosure : ComicBook is part of CBS Interactive, a division of ViacomCBS.

Previous articleStudents are deciding to remain in residence halls, despite University request to move out due to pandemic
Next articleCoronation Street studios spookily deserted after Coronavirus shutdown